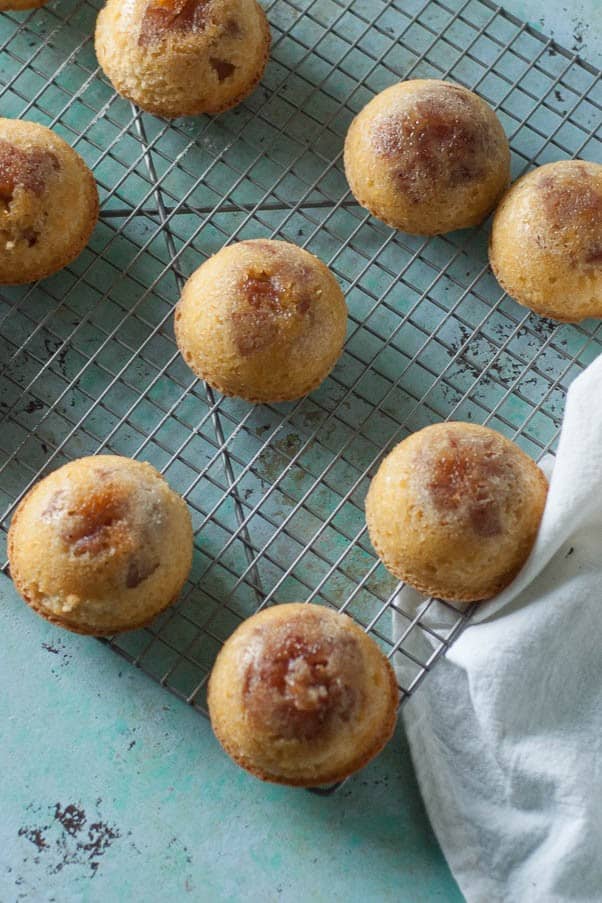 I spent the entirety of the week before last in a baking marathon. These brown butter apple almond cakes were just one of five different desserts plus a two-tier cake I made.

I was tasked with creating and producing a dessert buffet for our friends’ Traci and Dan’s wedding.

Traci loves good food and is an excellent cook herself. She had chosen to have her wedding catered by Boka, a restaurant group behind some of the best restaurants in the city including places like Stephanie Izard of Top Chef fame’s Girl & the Goat, Paul Virant’s Perennial Virant, Chris Pandel’s Balena, and Giuseppe Tentori’s GT Fish & Oyster.

And while my kitchen is relatively large and well-stocked for an apartment, it isn’t exactly designed to produce food for a hundred people. I have a normal sized refrigerator, a single oven, a 5-quart KitchenAid mixer, a 7-cup Cuisinart food processor–nice but not commercial-sized equipment.

And I’m just one person. With no staff.

So figuring out how to create a sufficient quantity of wedding-worthy desserts that would work within those constraints, was, to say the least, a challenge.

I had to be ultra-organized. I tested recipes over the course of a few months to figure out what would be feasible, portable, and result in a good mix of flavors and textures and create visual interest.

I took copious notes. I totalled up how much butter ( no, 10 pounds), granulated sugar (13 pounds), eggs (6 dozen), and so on I needed.  I planned out what I would make each day in the week leading up to the wedding.

Each day I tied my hair back with a bandana, put on some supportive footwear, donned an apron, prepped my mise-en-place, and worked.

I had built a little time into my schedule for something or other to go awry, and, when to my surprise nothing calamitous materialized, I actually finished a little earlier than expected.

Something that’s easy to forget when you’re used to making desserts for a small household is just how physical baking is.

There is so much lifting, bending, stirring, rolling out, cutting and heaving around heavy bags of ingredients. Doing something one time or even a few dozen times is nothing compared to performing the same motion a few hundred times.

By the end of the week I was exhausted, both physically and mentally.

But I was ultimately happy with how each dessert came out.

These brown butter apple almond cakes were among the desserts, and they were no exception. They have a rustic elegance and a simple comforting appeal. The flavors–vanilla bean brown butter, almond paste, apples baked with cinnamon–are inviting and familiar. (And if you like them you might also like these brown butter apple bars or this apple beehive.)

They aren’t the flashiest of desserts, but these little round domes are rich and nutty and buttery with a refined crumb and toothsome bites of cinnamon-kissed apples and slices of almond.

This particular version is gluten free (though you could make them with all-purpose flour if you prefer). The apples are roasted and half of the butter is browned with a vanilla bean ahead of time and allowed to cool.

The batter comes together in the food processor and then it’s divided among the molds and dotted with apples and almond slices before it goes into the oven.

Then the cakes get unmolded, and when fully cooled, they get dusted with powdered sugar. As a bonus, these cakes get even better if they sit for a couple of days, which makes them a perfect make-ahead dessert.

And honestly, if you’re only making two dozen little cakes or a single larger cake–instead of the 96 individual cakes I made for the wedding–it comes together pretty quickly and easily. And they’re so worth it.

They look amazing and well worth all of your efforts.

Thanks, Jennifer! It was truly a labor of love.

These look tasty. Thank for sharing this recipe.

I couldn't even imagine how to bake for a wedding or party let alone come up with such a fun mix of flavors! These look fabulous and I can't wait to try them!

Thanks so much! It was definitely a big challenge. I'll be sharing more of what I made soon.

Yum - thanks for sharing - they look and sound amazing!

Oh. My. Word. These look delicious! And dangerous. But I like living on the edge so I'm making them! :)

Karin, they are a little dangerous, but so worth it.