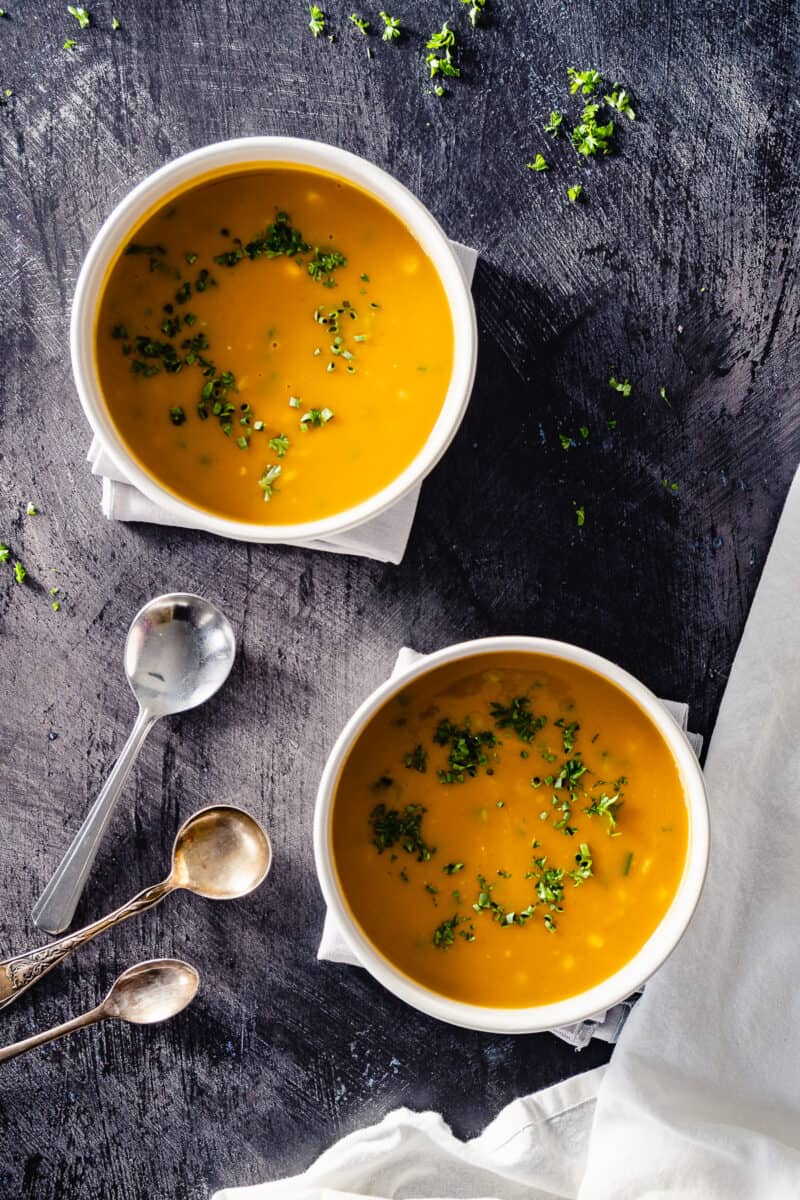 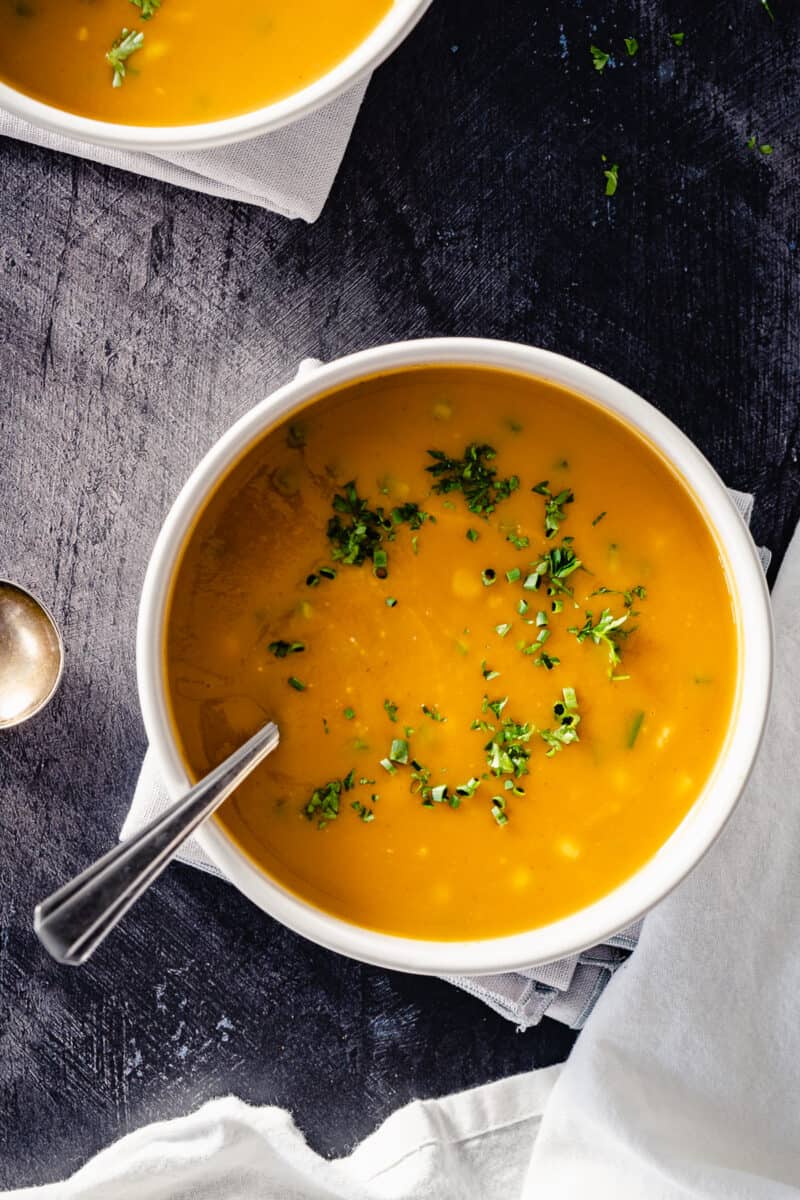 This is a later winter soup. A weeknight soup. A mostly from-the-pantry soup. A simple throw-it-together, simmer, blend, garnish and ladle into bowls and curl up on the couch in your sweatpants and watch some Netflix kind of soup.

I first learned about this soup when I came across it on Luisa’s site about five years ago, and I’m pretty sure I went home and made it that night, and it quietly slipped into my winter repertoire.

In February, I tend to have sweet potatoes and onions and garlic rolling around in my pantry.

They’re the kind of produce that can keep for weeks, that I turn to when I’ve been a little lax about grocery shopping and want something resembling vegetable matter in my dinner.

This soup relies on those pantry staples, which get simmered and blended into a velvety base, but the dish gets gussied up with frozen corn kernels for texture, molasses for sweetness, and cinnamon and cayenne and jalapeño pepper for spice and heat.

All the ingredients are easy to find at just about any grocery store. It doesn’t require any fancy techniques or strange equipment.

It’s nice to have a stick blender for this, but a regular blender or even a food processor will work if you have it.

It’s low-fat and vegetable-heavy. It can be gluten-free or vegan if you check the ingredients on your broth.

I sometimes like to serve it with cornbread, which is nice, but lately, we’ve just been having it on its own.

It’s a soup for nights when you want something that tastes real without too much fuss. This is a soup for the way so many of us cook.

Looking for more soup inspiration? Try this carrot ginger soup, this hot and sour soup, this roasted cauliflower soup, or this lentil-sweet red pepper soup with cumin and black pepper.

I made this tonight and it was a big hit with both my husband and I. The flavor was amazing. I’m not a big fan of molasses, but it worked perfect in this soup. Just enough to go hmmm, what is this?

Update: Although I was initially not a fan, (and I think my 3 sweet potatoes were overly large) it is absolutely delicious when allowed to meld with the flavors. I refrigerated it and two days later, viola! Perhaps the jalapeño, cayenne and molasses needed a bit more time to work their magic. I experimented a little bit - tried a bit of ham chopped up. Definitely the chopped scallions! Also curry flavorings go well here! Thanks for this excellent recipe. Does it freeze well?

I haven't tested freezing it, but I'm pretty sure it would freeze well. Glad you came around on it!

This sounded better than it turned out. If I was to make it again, I’d halve the molasses, and get a more even ratio of corn to sweet potatoes.

Hmm, everyone has different preferences. Most people have enjoyed the version as written, but you do you.

I made this for dinner tonight and it was perfect. I've never added molasses to a soup before and it really bolstered the flavor. Best part is, I had 2 sweet potatoes in my cupboard and not much else, so I was googling around to find something to do with them. Then I remembered *someone* had told me about your blog, so I checked it out. Lo and behold, exactly the recipe I needed! I've been heavily browsing and really enjoying your writing and photography. Cheers.

I'm so glad you liked it. This one is a regular for us.