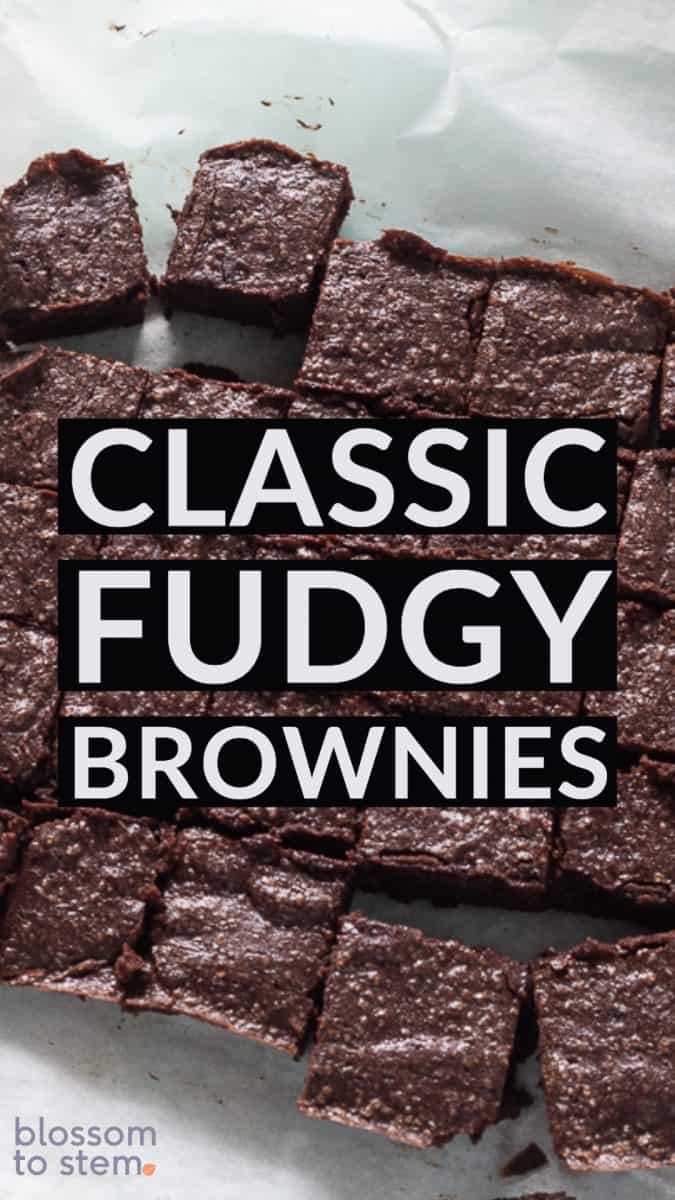 At least as long as it is a fudgy brownie rather than a cakey one (and who are those mysterious people who prefer cakey brownies?) and is sufficiently bold with chocolate flavor.

There are about eleventy-billion brownie recipes out there, many of them good-to-great (like these almond shortbread brownies). And maybe you don’t need another one.

I mean, I didn’t need another one of these brownies with my coffee this morning.

These brownies don’t have any fancy bells and whistles. There’s no caramel or peanut butter or coconut or anything else to compete with the chocolate here.

It’s not that I have anything against those additions. I like an over-the-top chocolate dessert as much as anyone (like this chocolate peanut butter tart).

But sometimes you want simple and classic.

And these are classic brownies at their sturdy, simple, chocolatey, fudgy best.

Or at least really good. When it comes to brownies, “best” is a moving target.

They get a double hit of chocolate flavor from a generous amount of bittersweet chocolate and a bit of cocoa powder for an extra boost.

The bittersweet chocolate gets melted with butter and sugar in a bowl set over a pan of water on the stove.

You can set up a double boiler if you like, but you can also just put a little bit of water in a skillet or saute pan and set any heat safe bowl down in the middle of the pan.

It’s a trick I learned from chocolate-goddess Alice Medrich’s excellent book Bittersweet, and it’s less fiddly than the double-boiler method and still manages to prevent the chocolate from burning.

Then eggs and a generous splash of vanilla get added in.

It might seem counter-intuitive, but the vanilla somehow makes these taste richer and more chocolatey.

Meanwhile, the dry stuff gets whisked together.

The dry stuff is a simple mix of flour, cocoa powder, and kosher salt.

It’s worth it to splurge on cocoa powder if you can—it’s a case where the fancy stuff is generally actually better. (But don’t worry, even if you have the cheap stuff, these brownies will be good.)

And don’t skimp on the salt. I use more than some other recipes for a reason.

It makes the chocolate flavor sing.

The other thing worth noting is that while many baking recipes rightfully caution you to stop mixing as soon as the flour disappears into the mixture to prevent overworking the gluten, these brownies are different.

They don’t have much flour, which means you basically can’t overwork them and you have to be sure to stir them enough.

You want to stir them until the batter begins to pull away from the side of the bowl. If you aren’t sure, give it in extra stir.

These brownies are rich, so wait for them cool (if you can summon the willpower) and slice them into small squares.

I mean, you can always have another one.

Omg, I just wanna sink my teeth into these fab brownies! I could indeed enjoy these for all three meals. Highly recommend everyone to give the recipe a try. Believe me, these brownies are irresistible; every bite tastes like heaven. Thanks a lot for sharing the idea with us. I hope the recipe will inspire many of your followers. You put so much love into what you’re doing. Keep up the good work!

There is nothing better than classic chocolatey brownies. So good

Love this idea! Looks so delicious and I can't wait to try it!

Absolutely agree with you - there is just nothing better than a good old brownie. I am always excited to try a new recipe though - and yours looks amazing!

Bintu | Recipes From A Pantry

These brownies have got my mouth watering! They look so fudgy and delicious.