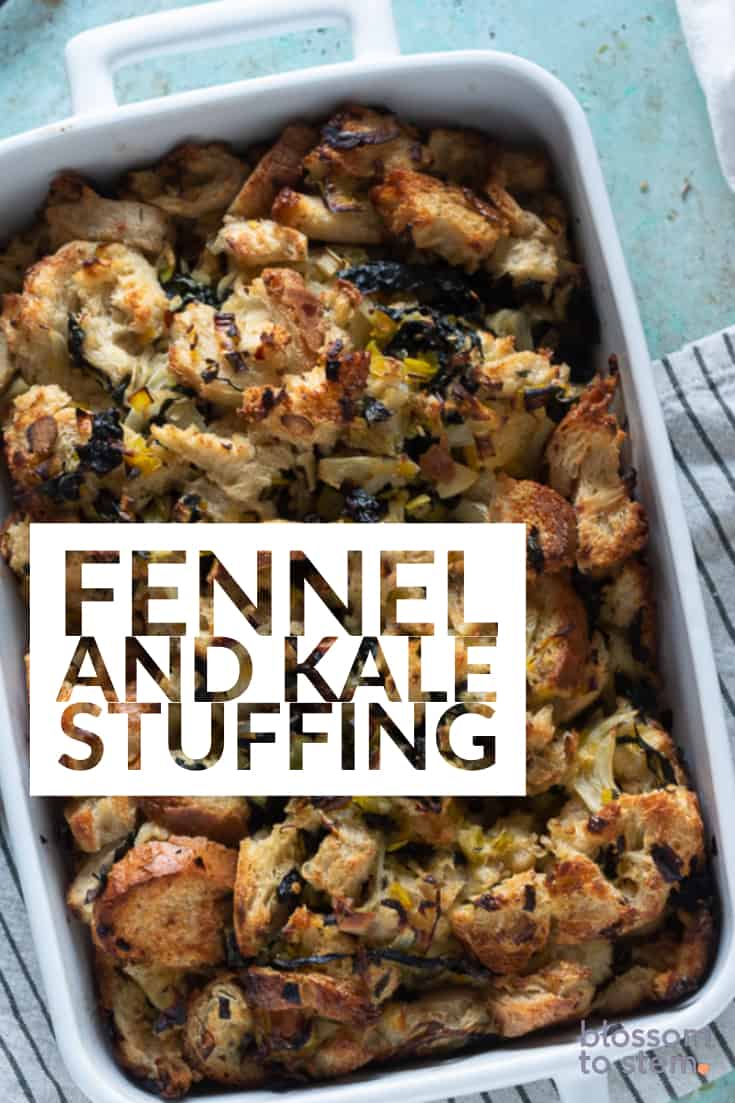 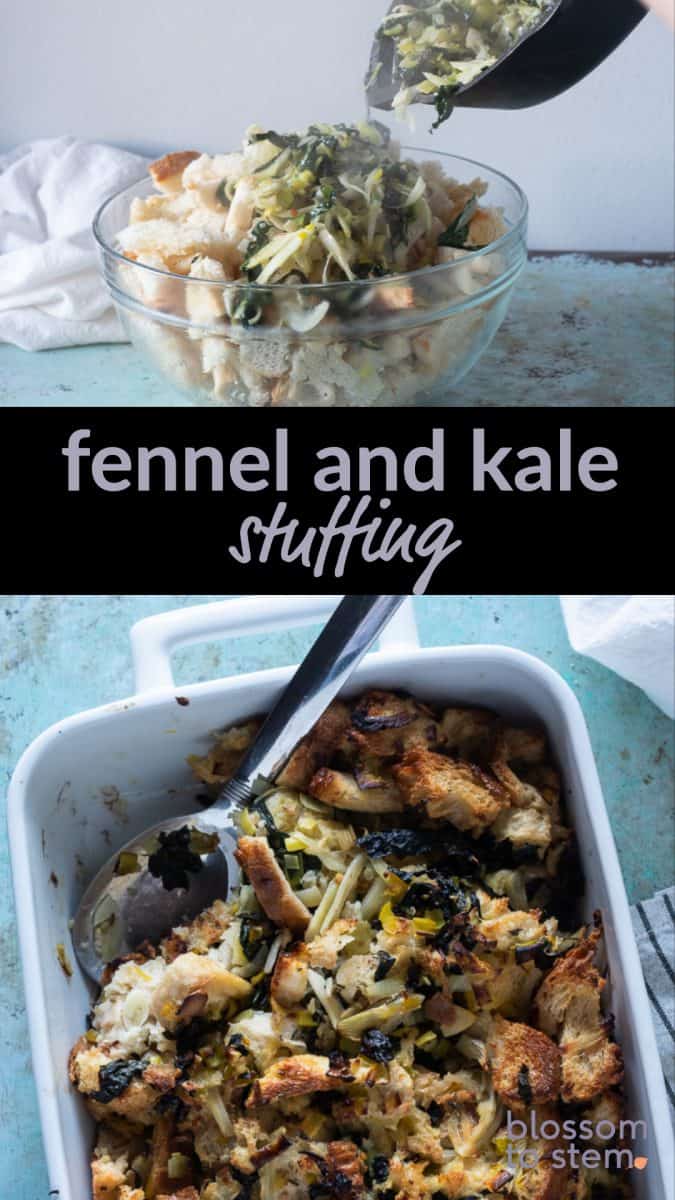 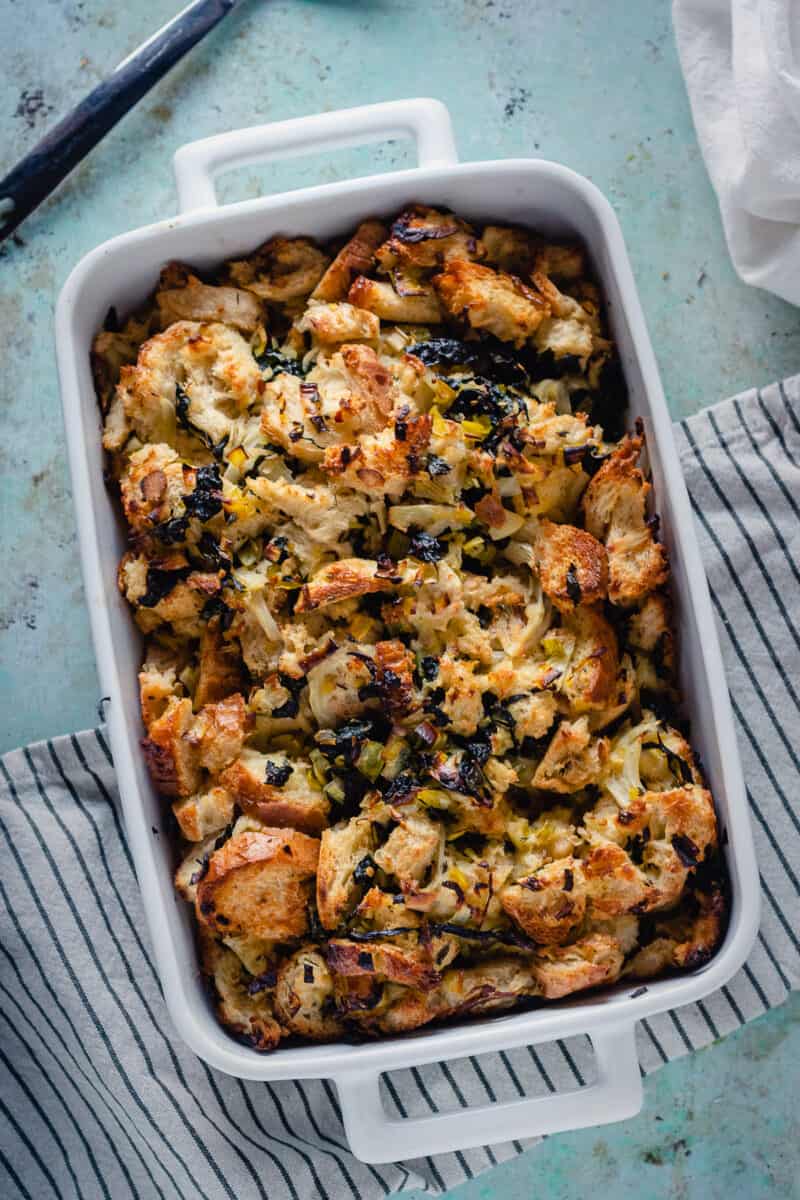 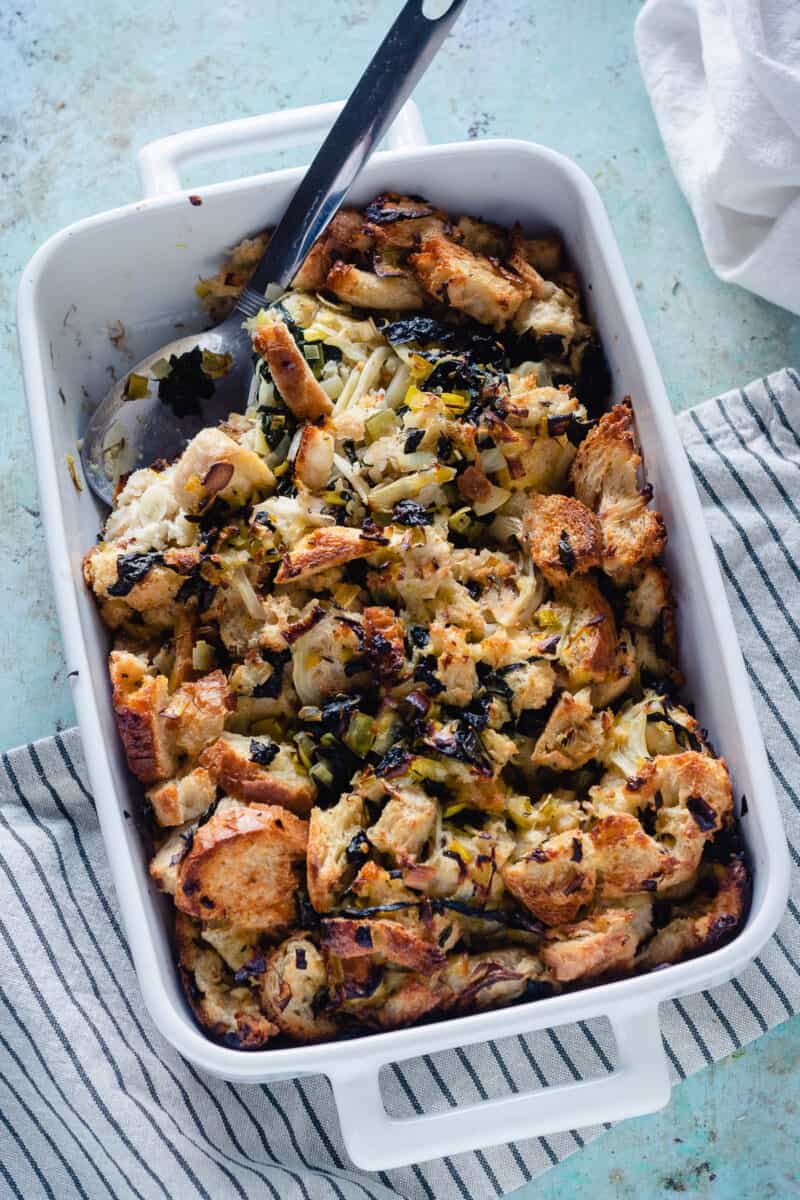 When it comes to Thanksgiving, I’m all about the sides. And my favorite side is stuffing. Or at least it is when it’s anything like this fennel and kale stuffing.

Something with hunks of torn bread tossed in olive oil and toasted until golden.

Something that feels classic in flavor-profile but has just enough extra vegetable matter, in this case in the form of thinly sliced fennel and Tuscan kale, that I don’t quite fall into a carb coma after one bite.

Something with layers of flavor from shallots and leeks and garlic and a generous pinch of red pepper flakes.

So much of a Thanksgiving dinner is stuck in the thrall of nostalgia and tradition. Sometimes people revolt at the idea of a meal without turkey at the center of the table.

(Even if some people welcome that thought.)

But stuffing is one of the places where there’s a bit of wiggle room for creativity.

(And if you’re looking for more creative Thanksgiving recipes, I’ve got you covered.)

This stuffing—well, technically it’s a dressing because it’s baked outside of the bird—is loosely based on a recipe from Suzanne Goin I came across years ago.

And she’s a genius, and her book Sunday Suppers at Lucques is a treasure, but her stuffing recipe was a bit too cheffy in its method of preparation and in its copious quantities of olive oil and butter.

So I rejiggered it to work better for those of us who cook at home and don’t want to start a stuffing recipe with a sub-recipe for slow-cooked kale and who wince at the idea of adding olive oil by the cupful.

I streamline the method, switch up the alliums, and moderate the fat a bit (it’s still celebration food, but not quite to oil and butter laden).

This starts with drizzling some simple rustic white bread (it doesn’t need to be anything fancy) with olive oil and toasting it in the oven until parts of it get deep golden brown.

Meanwhile, some minced shallots and rosemary and fennel seed and red pepper flakes get sauteed in olive oil. Then some sliced kale and garlic go into the pan and everything smells amazing.

I like to use Tuscan kale (sometimes called lacinato or dinosaur kale) for this because it’s more tender, but curly kale will also work.

At that poin the leeks and fennel go in along with some butter and fresh thyme. And if it’s possible, your kitchen smells even better than it did a few minutes before.

The vegetable mixture gets added to the toasted bread pieces and they get mixed together to get the toasty bread a little bit soft.

And then you deglaze the saute pan with a splash of white wine and warm up some broth (it’s vegetarian if you use vegetable broth, but it’s also great with chicken broth).

Then you add the liquid to the bread and vegetable mixture where the whole thing slumps into some pleasant sogginess.

And some beaten eggs get mixed in to add some body to the mix.

And, finally, the whole thing gets spread in a baking dish and goes into the oven.

There, it bakes up into a tender, puffy pan of deliciousness.

The top gets all golden brown and lovely. The corners gets crisp.

And it makes a pretty much perfect accompaniment to everything else on your Thanksgiving table.

Can be made ahead and baked with foil the night before, then refrigerated and baked for 30 minutes until browned just before serving.

I love the idea of adding more green vegetables into Thanksgiving day, especially when it's mixed in with crusty bread.

I love this healthy twist on an old classic. Great job!

This looks so amazing! I am someone that heads straight for the stuffing at Thanksgiving dinner so I would definitely make a beeline for this dish!

This sounds so flavorful with the fennel and kale. I think my family will love it.