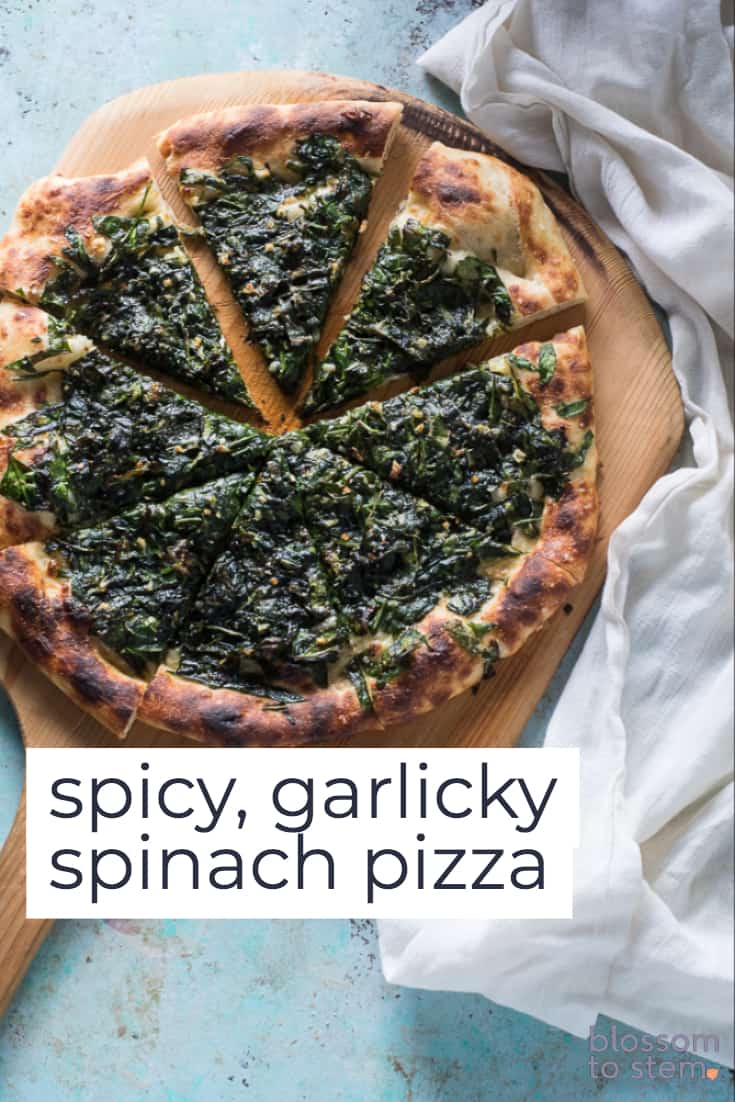 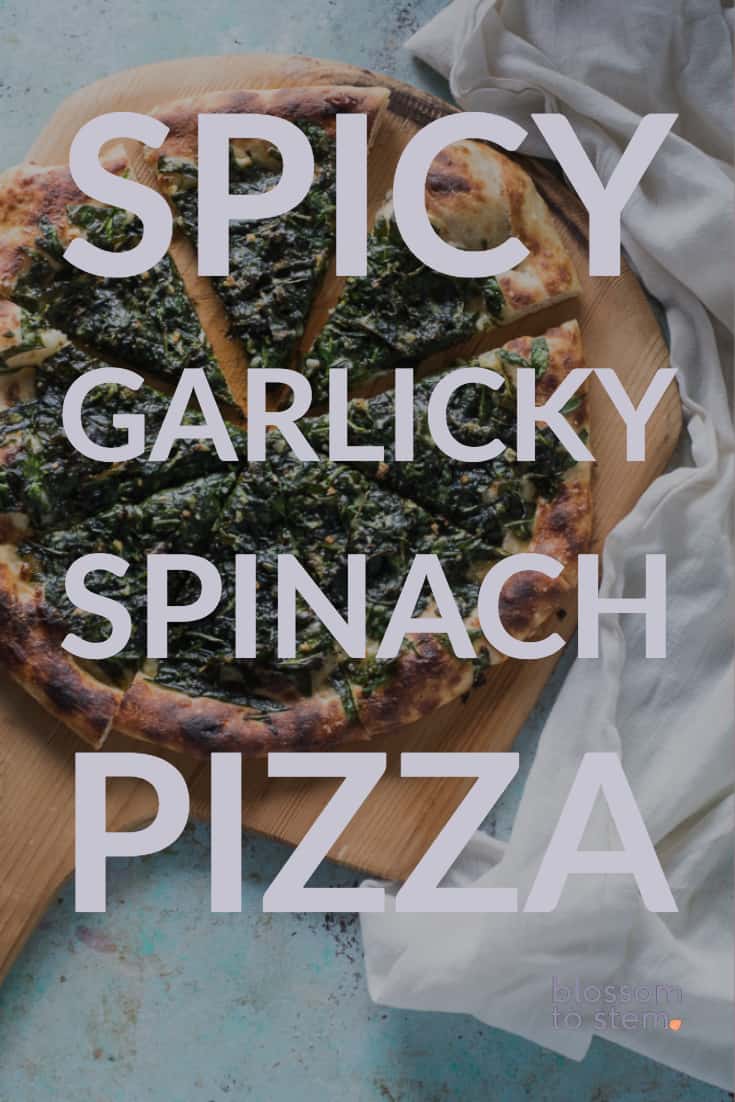 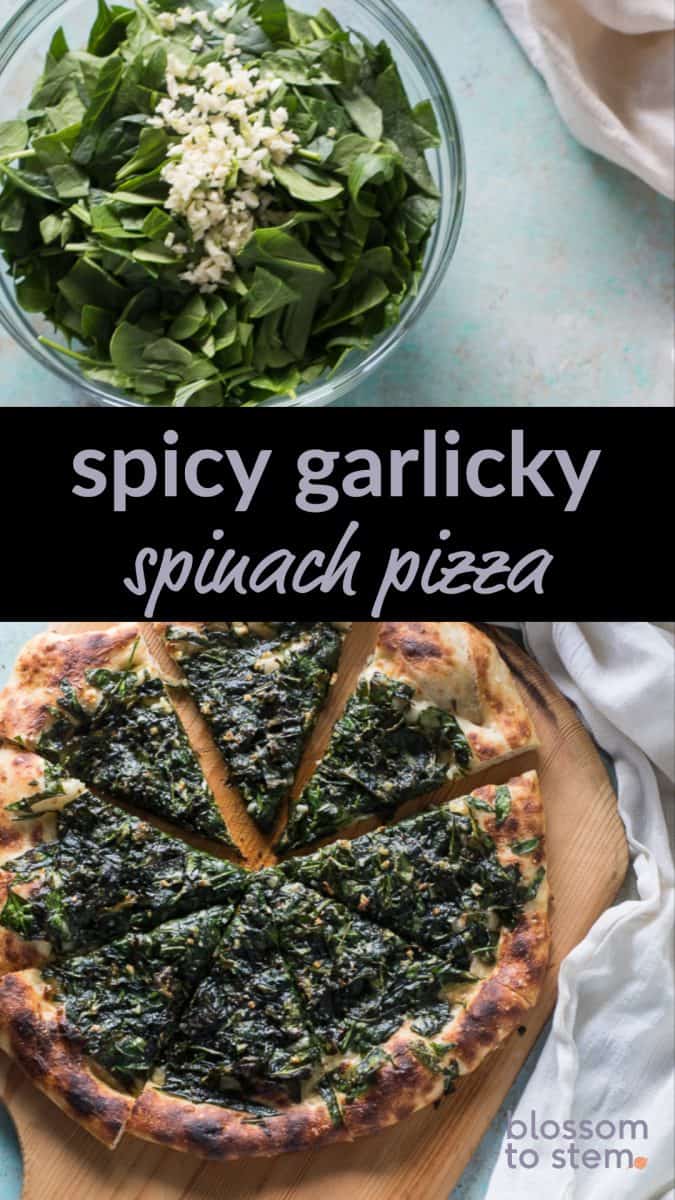 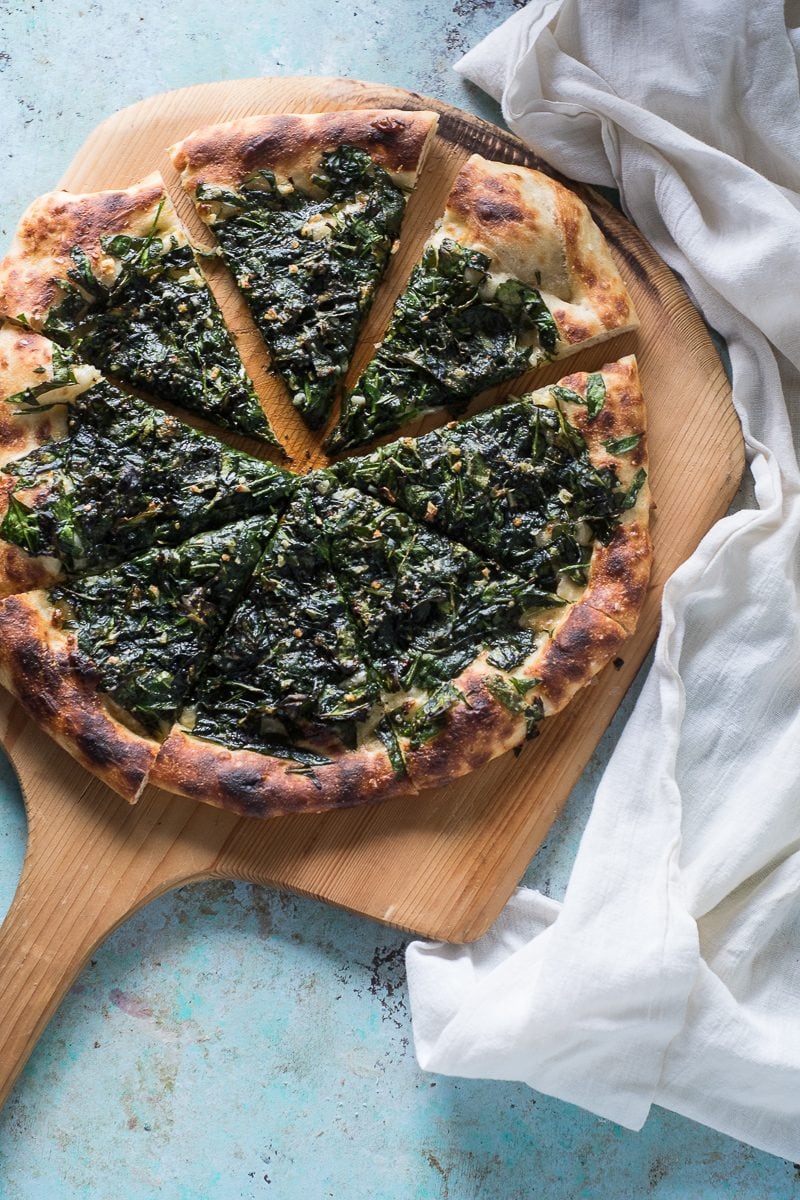 I know, I know, it’s spinach pizza. It sounds kind of boring. We’ve all seen some version of this before. But this one is different from all of those sodden, cheese heavy versions.

It’s light and fresh with some heat and chew, and unlike those cheese bombs, it’s the sort of thing I can (and do) eat all the time without feeling overstuffed.

Years ago, when I was new at pizza making, I had trouble with spinach as a pizza topping.

I usually sauteed it first and did my best to drape the limp bits over the crust. The spinach was tough to distribute evenly that way and the resulting pizza tended to be by turns a little soggy or barely spinach-y.

It wasn’t terrible (it was still pizza) but it wasn’t anything I was proud to share with the world.  I mostly gave up on it and devoted my pizza making efforts elsewhere.

Then I had a version of spinach pizza at our dear departed neighborhood pizza joint, Great Lake, that changed how I thought about what a spinach pizza should look like. It was so incredibly green and pleasantly salty and it disappeared even before their excellent margherita pizza we brought home.

It set the wheels turning for me to make my own take on spinach pizza. I have no idea if I got close to Great Lake’s version, but this is one makes me happy. I’ve been making it for several years now, and I can’t get enough of it.

A pile of raw shredded spinach gets tossed with olive oil, garlic, some grated parmesan cheese, and a serious dose of crushed red pepper flakes.

Then it gets mounded almost implausibly high on a thinly stretched pizza dough, slicked with a light coating of olive oil with a dusting of flaky sea salt and a sprinkle of shredded mozzarella.

Then it goes into a blazing hot oven where the spinach slumps into a thin layer while the edges of the crust bubble and puff and turn deep golden brown.

The hot dry oven cooks the spinach quickly and helps some of the moisture evaporate so the crust stays crisp. This pizza is not just spinachy, but also garlicky with a real kick of heat on the back end.

I can’t get enough of it. 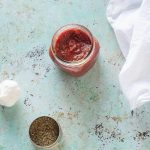 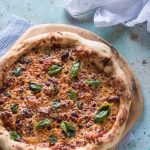 I'm a super fan of spinach ... and pizza...so this combo is total winner in my book! Thanks for sharing...I'm pinning it now!

Thanks, Traci! This is one I return to again and again!

I agree with Rebecca! Your photos made me crave for Veggie Pizza! I love simple pizza recipes and I'm definitely saving this recipe!

Thanks, Katherine! I hope you love it as much as I do!

This sounds absolutely delicious and pretty healthy too. I'd love to add it to our weeknight meal for a quick option .... maybe a glass of white wine would go too :)

A glass of wine is always welcome with this :)

Your photos are so pretty, and I love how much spinach you've added to this recipe. It sounds (and looks) so delicious.

Thanks, Rebecca! I can't get enough of this pizza!

Thanks so much, Patty!