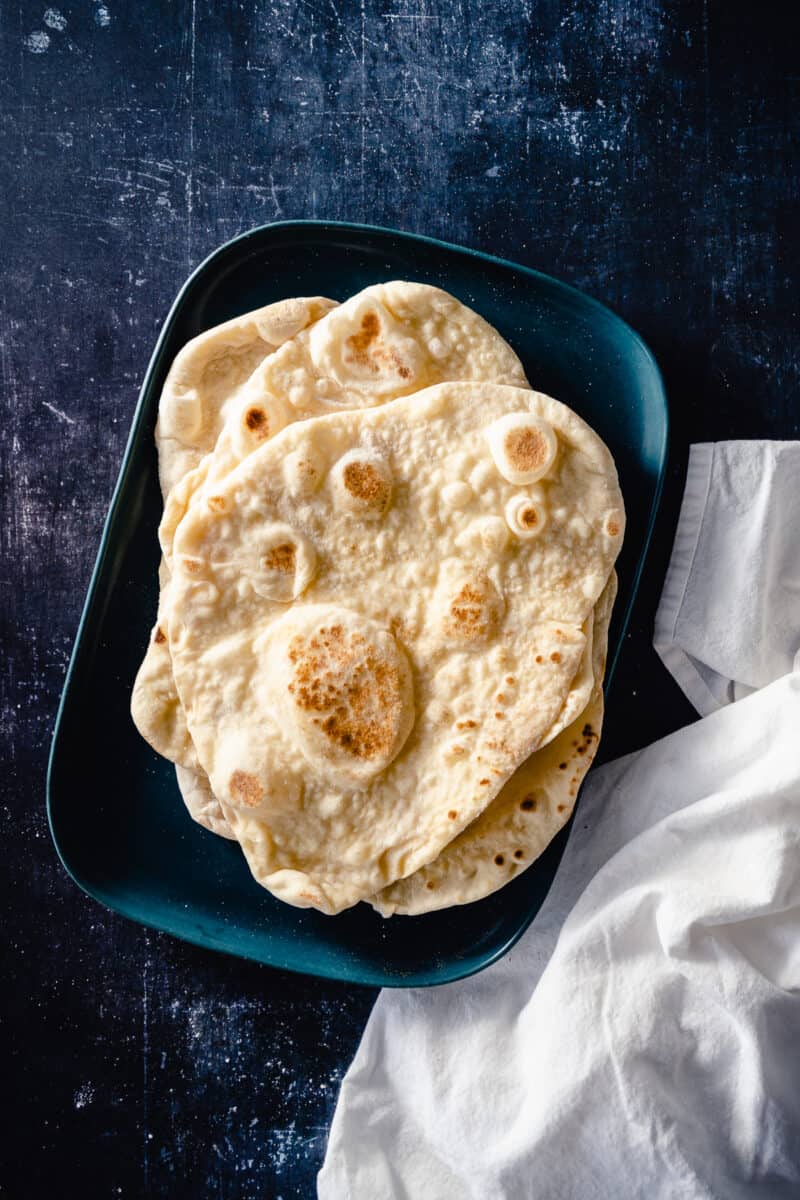 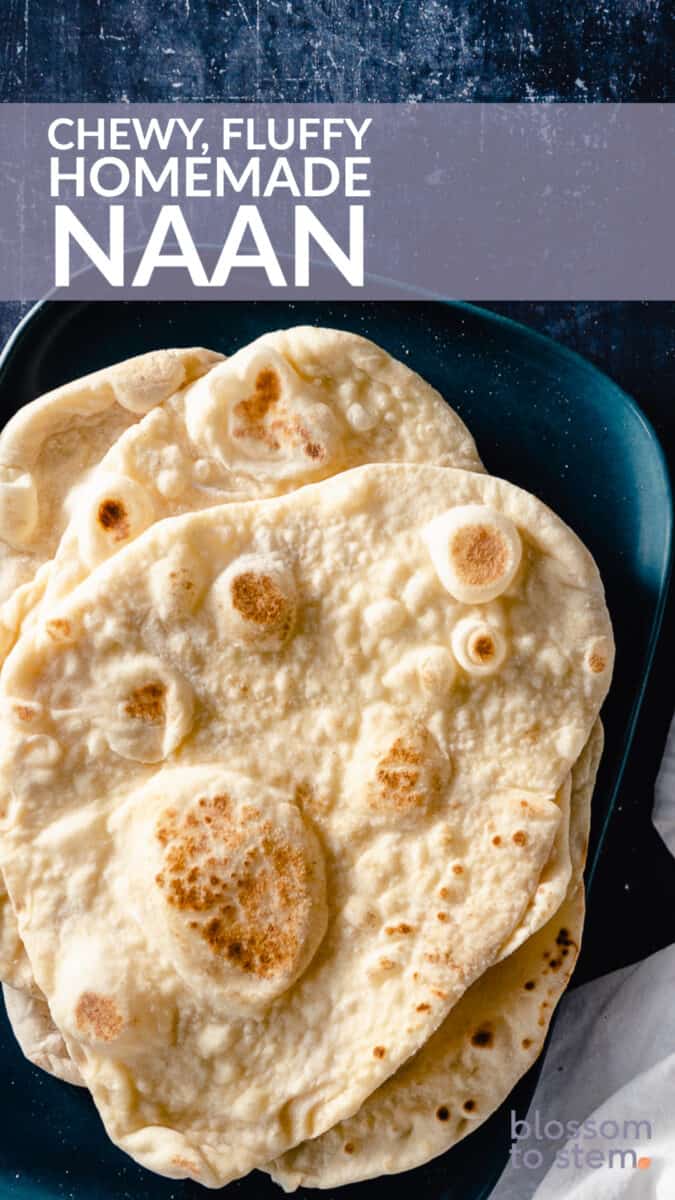 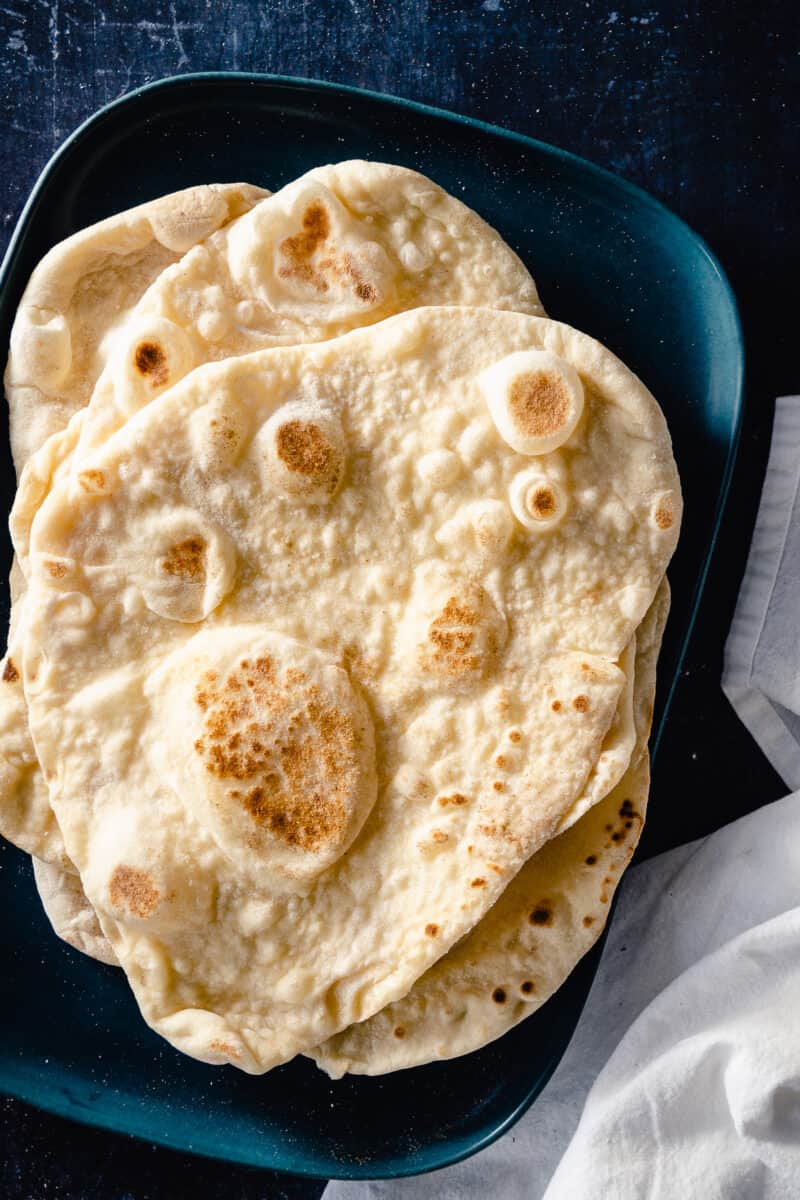 Whenever we order Indian food, regardless of whatever else we get, we pretty much always include naan. That wonderful pliant and chewy white flatbread that’s such a wonderful vehicle for soaking up sauces.

It’s traditionally baked in a clay oven, which makes the translation to the typical American home kitchen a bit tricky. Most of us don’t have tandoors, alas.

And while I’m a white lady with no Indian ancestry and I have no place telling Jaffrey how to make naan (the woman is brilliant and you should buy Jaffrey’s books), I’ve found better luck with Sodha’s method. (I also love her Bombay rolls. And you should also buy Sodha’s books.)

Even at the highest my home oven will go, the naan dough spends too much time in the oven and dries out before it gets baked through. It’s not as flexible or as charred as I’d like.

The stovetop method, on the other hand, takes only about a minute and a half for each naan to cook.

And it develops wonderful bubbles that get slightly charred while the bread stays pliable and easy to tear into and soak up the remainder of the korma or dal (or these totally not traditional but still delicious yogurt chickpeas with Indian-ish spices).

There are, similarly, differences of opinion on what ingredients should go into naan.

It’s traditionally made with yeast, and the further back you go, wild fermented yeast, but these days many home versions call for baking powder or baking soda either in addition to or instead of yeast.

These chemical leaveners work more quickly than yeast, cutting down on the rising time required for the dough.

And while I love the flavors that develop during a long slow rise, like in my go-to pizza dough, I can’t deny the convenience of a flatbread that can be ready from start to finish in the space of an hour and a half.

So I’ve settled here, like in the majority of versions I’ve consulted, on a combination of yeast and baking powder.

Most naan recipes include yogurt, which provides flavor and also acts as an enriching tenderizer. Some also call for milk, while others call for water.

My version uses Greek yogurt and water rather than adding extra milk which would further tenderize the dough.

I like the chewy results of this naan and don’t think you need to have two kinds of dairy here. Yogurt is necessary, milk optional.

But, if you have milk on hand you could absolutely use it in place of the water here.

Then all you have to do is mix everything together and knead it for about 5 minutes until it comes together in a ball and let it rise in a warm place for about an hour (if you’re in a cold and drafty kitchen it might be more like 90 minutes).

Then divide and roll out on a flour-dusted surface while you heat a cast iron skillet to medium-high heat.

Then you just cook the naan, one at a time, until they are bubbled and charred and they smell like freshly baked bread, about 45 seconds on each side.

Then you have glorious, soft, chewy, bubbled, charred naan.

You can brush with ghee or butter after cooking.

This looks so delicious and tasty! I can’t wait to give this a try! So excited!

We always have naan with our Indian food so will definitely be giving this tasty recipe a try!

What an easy and quick bread to make. I will be making this often.

My family and I are obsessed with Indian food and totally love naan bread! This looks so perfectly fluffy and tasty!

I love having this to dip into hummus. Yummy!