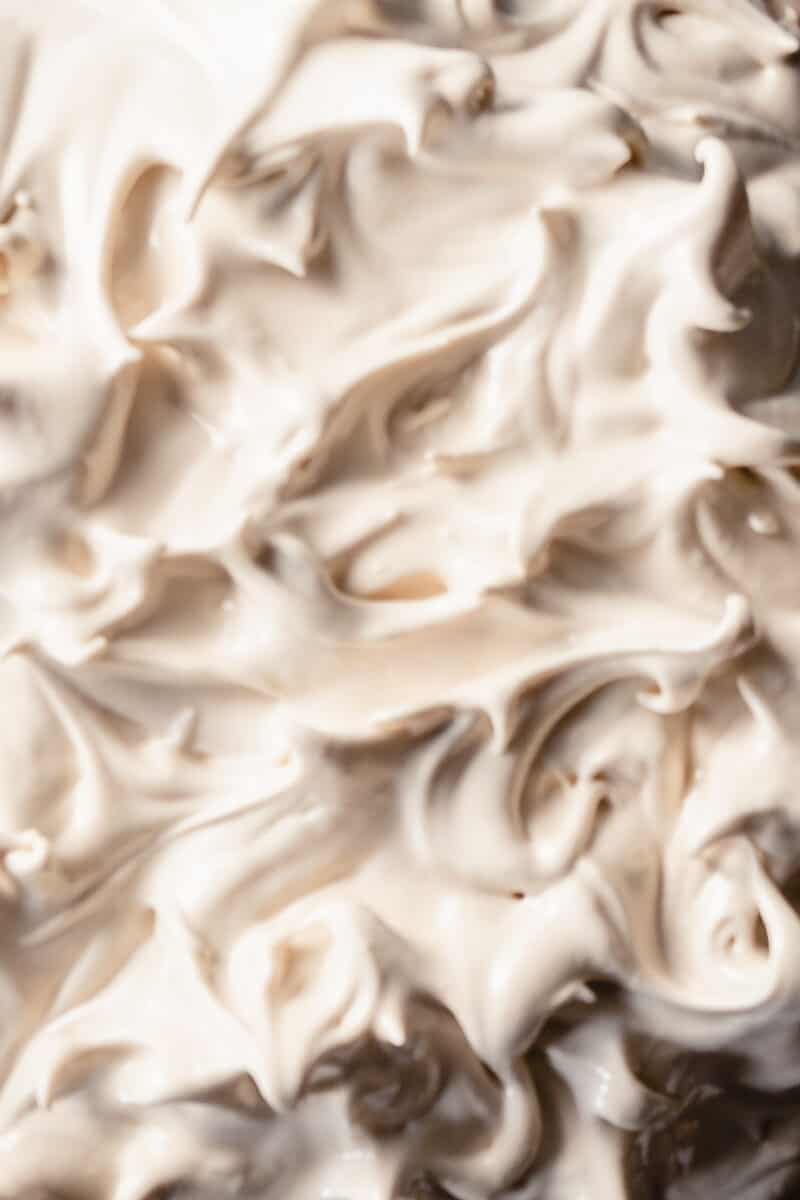 Unlike basic French meringue, which involves simply whipping egg whites and sugar together and must later be cooked to be safe for eating (which is great in things like a pavlova), Italian meringue is cooked in the process of making it.

This makes it more stable than basic meringue and less prone to weeping.

The process is simple, but it does require some precision and attention to detail.

Like pretty much any meringue, you need to aerate egg whites with sugar to get that lofty, billowing quality meringue is known for.

But the technique here involves heating sugar and water to make a sugar syrup that’s hot enough to cook the egg whites to a safe temperature, but not so hot that the sugar is crystallized into hard candy (that’s great for something like cashew brittle, but not what we’re going for here).

The temperature we want in the syrup is 240°F. So you’re going to need a candy thermometer.

Sometimes people get intimidated when a thermometer and hot syrup are involved, but it’s pretty much as simple as boiling water. You just need to pay attention to the temperature.

While the syrup is heating, you begin whipping the egg whites with a little bit of cream of tartar (or lemon juice) at low speed to loosen up the proteins and get them frothy. The acid helps to stabilize the aerated eggs.

But before the egg whites get into the bowl of your mixer, it’s worth paying attention to a few things:

When the sugar syrup reaches 240°F, you kick up the mixing speed to high and slowly, carefully pour the syrup into the whipping egg whites.

You should pour the syrup close to the edge of the bowl to avoid hitting the whisk, which could fling hot syrup away from the egg whites.

And then you just need to let the mixer keep going until the meringue is glossy and light and holds the kind of peaks that you’re looking for.

I usually aim for medium-soft peaks, which hold their shape but droop a little when using this to top pies.

This gives me plenty of leeway to avoid over whipping the meringue and ending up with a broken grainy mess, at which point there’s no saving it and you just need to toss it and start over.

But you can absolutely whip this to soft, medium, or stiff peaks depending on what you’re using it for.

Italian meringue can be toasted with a kitchen torch for a beautiful look and a sort of toasted-marshmallow flavor and texture.

To make a Brown Sugar Italian Meringue, replace 1/2 cup (100 grams) of the granulated sugar with dark brown sugar and proceed as directed.