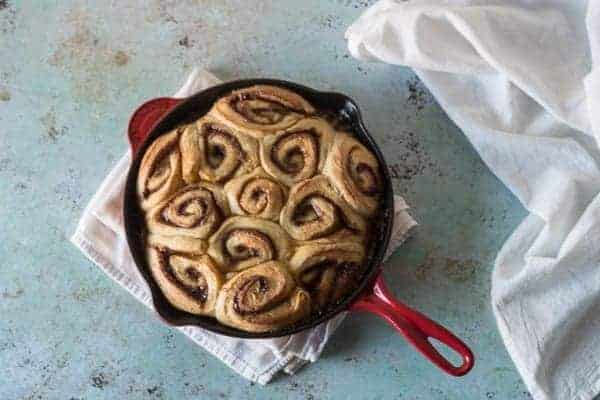 The brioche cinnamon rolls are pretty much the best make-ahead fancy breakfast treat I know.

They make use of my favorite no-knead brioche recipe, which is just about the simplest, most butter-wonderful treat I know.

The last time I made it, I used half of the dough to make a loaf of brioche, and the other half went into the freezer for later. And “later” turned into last weekend and these simple, gooey, unrepentantly rich and buttery cinnamon rolls. 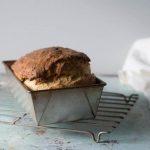 No-Knead Brioche: the easiest & best brioche there is

The dough gets patted into a rectangle and smeared with a nub of butter then sprinkled with a generous amount of brown sugar and cinnamon.

Then it gets rolled up into a fat log.

And then sliced into rounds and nestled into a cast iron pan or other baking dish.

And then they get slipped, ever so gently, into the oven, where they rise and expand into lovely swirling golden mounds.

I like to top them with a simple cream cheese icing that comes together in a few minutes while the cinnamon rolls are baking.

They are incredible when they are still warm from the oven, but unlike cinnamon rolls made with leaner doughs that tend to turn dry and rock-like in a few hours, these brioche cinnamon rolls are still tender and lovely the next day. (Dan says they have the texture of cold butter, which might be pushing it…)

They would make a spectacular breakfast for a holiday morning. You could even assemble them the night before, refrigerate overnight and bake them in the morning if you want to make the morning hassle free.

I cannot promise that they will do anything about this messy world, but I can tell you if anything tastes like comfort, these do. 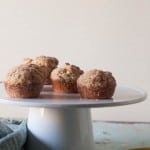 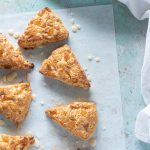 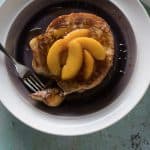 Looking for a quicker cinnamon roll dough? Take a look at these coffee cardamom morning buns. They’re ready in 90 minutes (and you could swap in cinnamon for the coffee and cardamom if that’s what you’re after).

For the cinnamon rolls

For the cream cheese icing 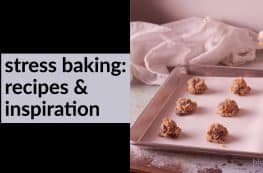 Stress Baking: recipes for the days ahead of us 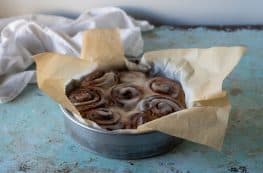 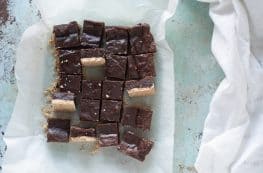