This cake is a beauty. It’s an oversized s’more in cake form.

Four layers of honey graham cracker cake get filled with vanilla marshmallow cream and bittersweet chocolate ganache and topped with a gooey marshmallow meringue frosting which gets toasted with a kitchen blow torch to bring in a whiff of campfire.

This cake was for my friend Kelly’s baby shower. Kelly’s a friend of mine from college, and in the camping trips we took together in our early 20s we toasted our share of marshmallows over campfires from downstate Illinois to South Dakota and made plenty of s’mores. She’s expecting a boy in June and I’m so happy for her.

When our friend Liz asked me to make the cake for the shower, I thought of those camping trips and the exciting new adventures Kelly and Steve will have with this little guy.

I had a clear picture in my mind’s eye of what this cake would be like, but I couldn’t find a recipe that exactly matched it.

I wanted a rich vanilla marshmallow cream with enough body to stand up to multiple layers of cake.

So I started with cream steeped with vanilla bean and poured it over chopped white chocolate to give it some stability. Then I toasted marshmallows under the broiler and stirred those into the cream and let it chill overnight.

I knew I needed a deep dark bittersweet chocolate ganache layer to  balance the sweetness of the honey graham cracker cake and the marshmallow cream.

I remembered a nice sturdy one I had made a few years back for an opera cake from Joe Pastry, so I used that.

And I knew I wanted to top it all with billowy puffs of toasted marshmallow meringue frosting, which I remembered seeing on a sweet potato cake on Smitten Kitchen.

I like to think of this recipe as a team effort. The sort of thing that I couldn’t have done without learning so much from other bakers much more talented than myself.

It came together just how I imagined it would. I have to admit I was proud of myself. (Though I was a little disappointed that some of the marshmallow frosting took a dive off the side of the cake in transit to the shower. Sigh.)

It’s a big cake, but there was very little left at the end of the party. I’d say that’s a sign of success.

Looking for another excuse to use that blow torch? Try this cranberry curd tart.

For the vanilla marshmallow cream:

For the honey graham cracker cake:

For the bittersweet ganache filling:

For the cinnamon honey soaking syrup:

For the ganache topping:

For the marshmallow meringue frosting:

At least 2 days in advance:

At least 1 day in advance:

On the day you want to serve the cake (about 4-5 hours ahead of serving):

About 1 hour before serving: 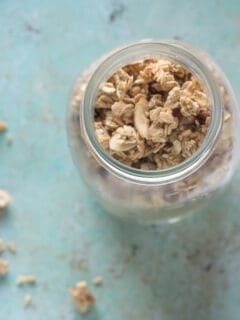 […] as much as I love taking on insane cooking projects, I have my limits. I’m just not going to deep fry anything for a weeknight […]

[…] the Momofuku theme and turned to Christina Tosi’s Momofuku Milk Bar cookbook. I’ve made plenty of cakes lately and I was ready for a change. It wasn’t quite the weather for ice cream, […]

Wow does that ever look good!

Thanks for the shout-out, Mary!

Thanks Joe! I'm a big fan of your blog.

As Trac said, shut the front door! That is amazing :)