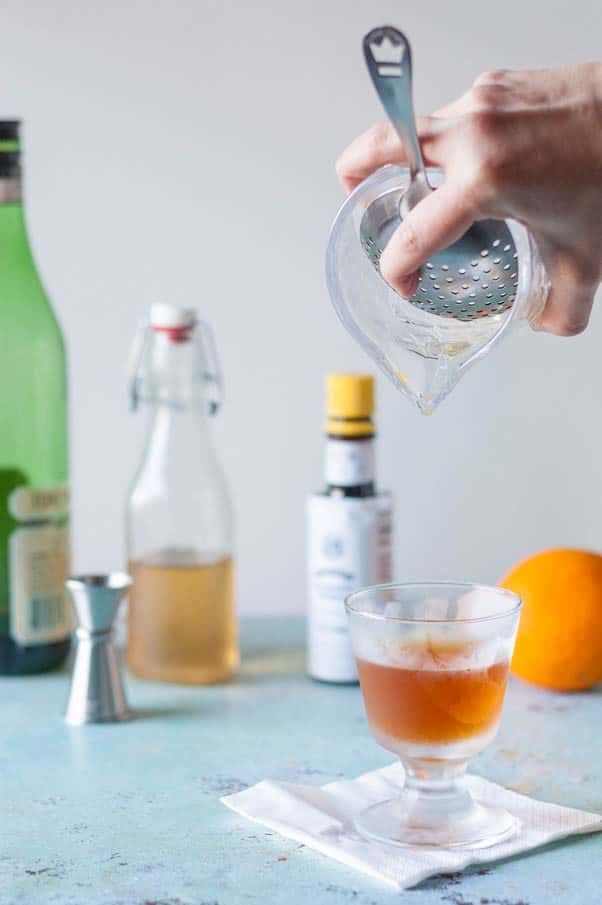 I don’t remember exactly when I first learned about Fernet-Branca. But somehow, perhaps four or five years ago, a bottle of it found its way into our liquor cabinet, and for a long while after that I didn’t quite know what to make of it.

It’s a beast of an amaro, an aggressively herbaceous Italian liqueur with a flavor that’s often described as “medicinal” and almost always “an acquired taste.” It has a muddy brown color and an intense aroma with a distinct menthol flavor that lingers after you sip it.

It’s insanely popular in Argentina, where it’s frequently mixed with Coca-Cola, and it’s long been popular with bartenders in San Francisco where it remained legal during Prohibition for its reputed medicinal properties.

Some claim it aids digestion or prevents hangovers, and while there might be something to the former claim I highly doubt that any compelling evidence exists to support the latter. Among bartenders it’s become a popular shot.

It’s a tricky ingredient in a cocktail. Because its flavor is so strong, it easily takes over the whole drink. And yet, when used judiciously and mixed with flavors that can stand up to it, Fernet adds a complexity that’s simply unmatched.

It’s a riff on the Old Fashioned made with either Canadian whiskey or rye (I always make it with rye), a bit of simple syrup, a few dashes of Angostura bitters, and a judicious amount of Fernet. It gets a squeeze of orange peel (or even better, a flamed orange twist) as a garnish.

It’s a bracing drink, strong as all get out, with a spicy, herby bite from the Fernet. The simple syrup and the orange help to sand off the rough edges.

It’s a brash cocktail, and I’ll admit it won’t be for everyone. But if you’ve made Fernet’s acquaintance, this is a good way to make it a friend.

Ha, I love this post! I have to meet Fernet, and I'm not even a hardcore cocktail person. Gorgeous pics. :)

I haven't tried Fernet, but I am trying to up my cocktail game, so I may have to try this. Beautiful photos!

Thanks, Erika. Fernet is definitely an acquired taste, so don't be surprised if you don't like it the first few times you try it. But once you get past the initial phase, it can become something you crave. (At least it is for me.)

I'm not into herbal liqueurs, just not my taste but I love your photos! And who knows, maybe I'll try this recipe one day :)

Candy, I hear you. These are definitely not for everyone.

I wasn't familiar with the Fernet-Branca, so thanks for this! We're usually looking for a new cocktail for the holidays, (and we don't do fussy and/or sweet ones). If I can find the liquor, we may give it a try!

Thanks, Tamara! This is neither fussy nor sweet, so it sounds like it's right for you. Fernet-Branca is usually pretty easy to find at well stocked liquor stores.

This recipe sounds incredible! I'll def be making it for Thanksgiving coming up! Beautiful pictures, by the way!