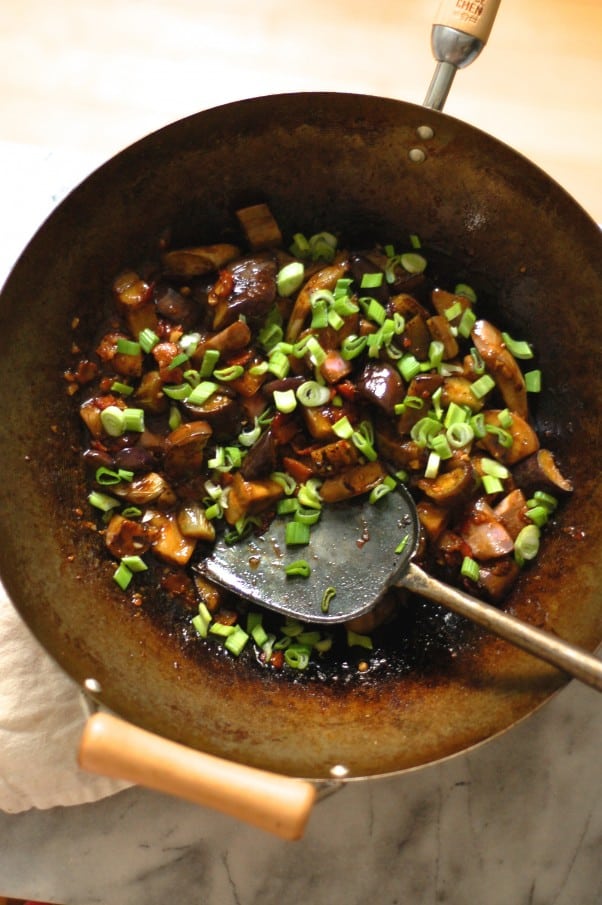 Eggplant is a fickle fruit.

It is technically a fruit and not a vegetable, despite its savory leanings.

Its flavor can be unpleasantly bitter. Its texture can be too chewy or too mushy if it is over or under cooked. It can act like a sponge when it’s in a pan with oil, becoming heavy and sodden.

And yet its popularity persists.

Probably because when eggplant is done well, like in eggplant caponata or in this Sichuan dish, it can be tremendously good.

In general, I like to cook with the long skinny Chinese and Japanese varieties of eggplants rather than the fat and round Italian varieties.

In my experience, they tend not to be bitter and have a firmer, denser texture. (But you can still use Italian eggplants here if you have them.)

Despite its name, fish fragrant eggplant contains no fish or fish sauce. Instead, it uses the same pungent mix of hot, sour, salty, and sweet flavors that are traditionally used for cooking fish and seafood in Sichuan cuisine.

This dish is traditionally deep fried, and I have little doubt that it is delicious when prepared that way.

But I don’t deep fry anything on a weeknight, and this dish is too good to save for the rare occasions I’m willing to deal with disposing of a vat of hot oil.

Instead, I soak the eggplant in water for about 20 minutes and then rub it with cornstarch before sautéing it in a small amount of oil in a hot wok until it’s browned on the outsides and tender in the middle (a technique I learned from Maggie at Omnivore’s Cookbook).

This recipe is adapted from Fuchsia Donlop’s Every Grain of Rice, a great book for anyone looking to get started with approachable Chinese home cooking.

I’ve made vegetarian versions of this dish, sans bacon and with water subbed in for the chicken broth, and it’s pretty great that way. But it turns out I like it even better when it’s got some smoky bacon added.

Bacon, as far as I can tell, is not a traditional Sichuanese ingredient, but pork certainly is, and I’ve seen many versions of this dish that use ground pork for meaty oomph.

One day I had some extra strips of smoky, thick-cut Nueske’s bacon in the refrigerator that I didn’t want to go to waste and decided to cut it into little pieces and toss it in the wok and then cook the eggplant in the bacon fat. After that, I haven’t made it any other way.

This is some of the best Chinese food that I’ve ever produced at home. It’s become one of my favorite things to make during eggplant season.

Looking for something else to do with that Chinkiang vinegar and Sichuan bean paste? Try this Sichuan send-the-rice-down chopped celery with beef. It’s so good.

Hi Mary, I just made this tonight after finally gathering all the necessary ingredients and I have to say thank you for my current food coma :) it was delicious, just as you promised!

Is there something that I can substitute for the chili bean paste? I greatly appreciate it! :D

I'm sorry to say that the chili bean paste is essential to the flavor of this dish. Any substitution would really change the flavor profile. You can buy chile bean paste on Amazon (there's a link to some in the recipe description) if you have trouble finding it locally.

I made the Sichuan Send-the-Rice-Down Chopped Celery with Beef tonight, which was easy and delicious. Can't wait to try this one next. I found the chili bean paste at Broadway Supermarket here in Chicago (after trying a few other places...). Might have to get this cookbook!

Made this last night and it was delicious! I added green pepper to the bacon, mushrooms to the eggplant and skipped the first corn starch rub. I will make this again and again - thanks so much for the recipe and glad I found your blog!

I'm so glad you liked it! This is one of my favorites (and, as you've clearly discovered, it's a flexible dish with many variations that work).