Making light of the dessert: A low-fat tart crust

I am not, usually, a low-fat baker. While I don’t exactly pour pounds of butter into things and often use whole grains and sometimes nip a tablespoon or two of fat out of a recipe, I tend to believe that a treat should remain a treat. I think that a sliver of flourless chocolate cake makes a better dessert than a box full of Snackwells. (Do they even make those anymore? It appears they do.)

But. But sometimes even a sliver is too much. We have been eating low-fat and low-cholesterol around these parts of late. It has been a summer without pies, without cookies, without cakes, without ice cream. I am leery of imitation fat and sugar. If I am going to eat light, I go for things that come by their lightness naturally. It has been, very much, a summer of sorbets: sour cherry lambic, almond, peach-jasmine, blackberry. Bright jewel-toned scoops of homemade goodness. But sometimes you, err, or at least I want something else, something a little less frozen.

And so I turned to Alice Medrich. I love Alice. A friend was recently asking me about cookbooks I trust completely, and my first thought was of The Zuni Cafe Cookbook, but now that I think on it, I could just as easily have said anything by Alice Medrich. I trust her implicitly when it comes to desserts. She is best known for her expertise with chocolate, and I have my eye on a cookie book that is forthcoming. Some years back she wrote a fantastic book about low-fat desserts. It is, sadly, out of print. I nabbed a used copy a few years ago, and in the intervening time it has gone dusty on my bookshelf while Bittersweet and Pure Dessert were getting repeatedly smudged with dough-and-batter-covered fingers. Well, after this tart crust, I am convinced that she has nailed the low-fat thing too. I have a number of other recipes tagged, things that will probably be making their way into our rotation of sweet things.

As for the tart, it doesn’t feel like it is hiding its lightness. You will know it isn’t a “regular” butter and flour pate brisee or pate sucre, but it is a lovely airy and crunchy confection that provides a suitable base for a slick of honey sweetened Greek yogurt and bourbon-and-turbinado glazed peaches. As Dan said “It’s no Opera cake, but it isn’t 1500 calories a slice either.” And it still manages to feel like a treat.

Source: Adapted from Alice Medrich’s Chocolate and the Art of Low-fat Desserts

This tart crust bears little resemblance to its heavier brethren. It is light and crunchy, more reminiscent of a macaron or meringue cookie than a traditional pate brisee. Do take care when cutting it at as it can crumble a bit. Careful slicing with a serrated knife should mitigate that. A prettier alternative would be making this in individual tartlet pans. It will make eight 3.5-inch tartlets or about six 4.5-inch tartlets. Be patient with the batter, as it can be a bit squirrelly to spread, and handle the crust gently when taking it out of the tart pan. But really, it isn’t all that difficult to make. It doesn’t rely on scary imitation ingredients. The only unusual thing here is the Wondra flour, which comes in a bright blue canister and was probably in your grandmother’s pantry for thickening gravy. It is a finely milled, low-protein, pre-cooked flour designed to dissolve quickly in liquid without forming lumps. It should be available at most grocery stores in the aisle with the packets of gravy mix.

In a medium bowl, mix Wondra flour and baking powder together.

In a stand mixer (or a large mixing bowl if using a hand mixer) combine sugar, egg, and vanilla, and beat on high speed for a good 3 minutes, until the mixture is thick and opaque. Be sure to beat for the full time here. Add the lemon zest and flour mixture and beat until just combined.

Spread the batter into the tart pan with a silicone spatula. Be patient here as the batter is fickle and may slide around and form holes as you spread it. If that happens just patch it up carefully. Try to make the sides as thick as the middle, but don’t worry if it slides 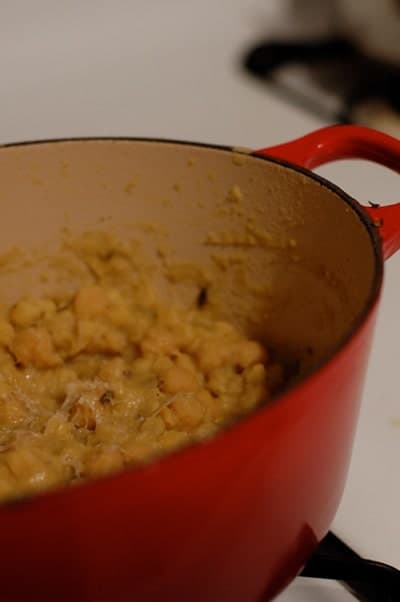 Previous
mangiafagioli, in bean counting times
Next
Stay Curious: a new to me fruit, the ground cherry
Click here to cancel reply.