When I mentioned to a few people that I was planning to make Armenian tahini bread, the most common response was, “Where exactly is Armenia?”

This landlocked country in Transcaucasia, bound by Georgia to the north, Azerbaijan to the east, and Iran and Turkey to to the south and west, has had a rough go of it. Outsiders repeatedly mistake and confuse its identity when they remember it at all (Clarissa Dalloway’s muddled refrain regarding “the Albanians, or was it the Armenians?” whose genocide her husband was so concerned about comes to mind). Even the term Armenian was likely a result of a mix-up by the Greeks or the Iranians who mistook them for Aramaeans; Armenians called themselves Hayk. (They are still being misrepresented in popular media, Borat’s “Kazakh”-speaking friend was actually speaking Armenian.)

Still, I’ve found something that will help to fix Armenia in my memory at least. This tahini bread is a traditional food for the Christian season of Lent, which is usually a time for fasting and general self-deprivation, but this is an unusual treat. It dispenses with butter, eggs, and cream in favor of a dough enriched with a bit of olive oil and marbled with sugary, cinnamon-scented sesame paste. When I saw the recipe in the January/February issue of Saveur, I couldn’t get it out of my head.

Saveur describes these as “a croissant mated with halvah.” I approached them thinking cinnamon rolls, but came away thinking of them as a danish’s much heartier, nuttier cousin. They look deceptively bready–but unlike most breads, they crumble. And ooze tahini.

A slice of one of these makes a satisfying breakfast or a good afternoon companion for tea. It can also pass for dessert.

Source: Adapted from the Jan./Feb. 2007 issue of Saveur magazine. Original recipe can be found here.

Shaping these can be tricky. Don’t be alarmed if some of the tahini-sugar mixture oozes out or the dough develops a little hole. Just patch everything up as well as you can and keep going. Their homey, rustic presentation is part of their charm. I used a blend of all-purpose and white whole wheat flour. I thought the mild whole wheat flavor complemented the sesame well. If you want to use regular whole wheat, I’d adjust it to 1 cup and increase the ap flour to 1 1/2 cups to prevent it from getting too heavy. All ap also would also work, if that’s what you have on hand.

In the bowl of a stand mixer, stir together the flour, yeast, salt, and 1 teaspoon of cinnamon. Add water and olive oil. Mix with the paddle attachment on low speed until it comes together to form a shaggy dough, about 2 minutes. Switch to the dough hook and mix on medium speed for about 6 minutes or until the dough is smooth and elastic. It should clear the sides of the bowl.

Place the dough into a lightly oiled bowl (it can be the same bowl it was mixed in), and turn the dough once to coat with oil. Cover the bowl loosely with plastic wrap and let rise in a warm place until doubled, about 2 hours.

Preheat the oven to 350° F. Turn dough out onto a lightly floured surface and divide into two pieces. Cover with plastic wrap and let rest for about 10-15 minutes. Line two baking sheets with parchment paper and set aside.

Roll out one piece of dough into a long rectangle, about 12-14 inches long and 4-5 inches wide. Spread 1/2 cup tahini over the dough, leaving about 1/4 inch border on all sides. Sprinkle 1/2 cup sugar and 1/4 teaspoon cinnamon over the tahini.

Starting with one of the long sides, roll the dough over itself into a long cylinder. Pinch the dough together along the seam and on the ends to form a seal. Using a bench scraper or serrated knife, cut the cylinder into three equal pieces. Pinch the newly cut ends together to seal in the tahini mixture.

This is where things get messy. Take one piece and roll and stretch it until it is about 7-8 inches long. Starting with the narrow end, carefully roll the dough cylinder into a spiral and, again, pinch the ends together to form a seal. Flatten the dough with your hand and, with a rolling pin, roll it out into a circle that is 7 inches in diameter. Repeat with the other pieces. Transfer to a prepared baking sheet, leaving at least an inch between each dough circle, and bake for 20-25 minutes or until the tops are light brown.

While the first sheet is in the oven, roll out the other piece of dough and repeat the filling and shaping process. Bake as directed above.

Cool on racks. Slice each round into four pieces before serving.

Yields 6 large rounds, for 24 servings. Best consumed within about 2 days. (Can be frozen and revived in the oven for longer keeping.) 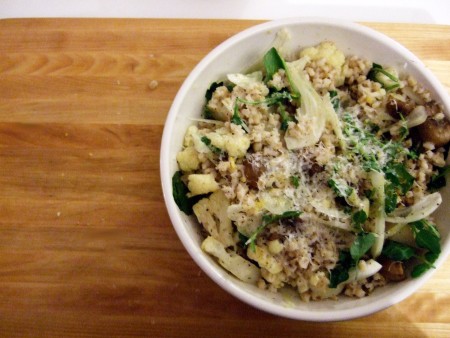 Next
with the grain
Click here to cancel reply.